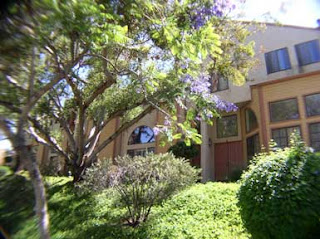 IndyMac Bancorp (the second-biggest mortgage company), National City Corp. and Lehman Brothers Holdings Inc. have been cutting staff. At least 100 mortgage companies have sought buyers or halted lending since the start of 2006, and foreclosures in the second quarter rose to a record, according to the Mortgage Bankers Association in Washington.

Adding to this already dire situation is the fact that mortgage defaults have started moving beyond the sub-prime sector: The Mortgage Bankers Assn. noted a rise in foreclosures on supposedly high-quality prime loans that were used by speculators who put little money down on houses in California, Nevada, Arizona and Florida, and now are walking away due to lower home prices.
Posted by sdfsbo at 12:24 AM No comments:

Foreclosures hit 17,408 for the three months ended June 30, for an increase of 799 percent from the same period in 2006. These foreclosure numbers well exceed the prior 1996 high.

Rich Toscano, with Pacific Capital Associates in San Diego said: "There will be individual pain for people who made the wrong decisions. We all may end up in a recession."

Posted by sdfsbo at 8:29 AM No comments:

San Diego Home Sales Figures – Not All That They Seem

San Diego Home Sales Figures – Not
All That They Seem
By Bob Schwartz
brokerforyou.com ©2007 all rights reserved.

This material is subject to copyright and any unauthorized use,
copying or mirroring is prohibited

Reviewing the recently released real estate
sales data for San Diego, the lay person might conclude that the June home
appreciation figures were down approximately 1% as compared to June 2005. The
reality is the decline is probably much closer to three or five times the
published figures!

The reasons for this are really quite apparent when one considers the following
facts:

1. The appreciation figures cited are the MEDIAN sales prices. The upper-end,
luxury home market has been extremely strong in Southern California and is
relatively immune to increasing interest rates. It operates totally apart from
the rest of the real estate market. The sales of these upper-end luxury estates
skew the MEDIAN appreciation sales data.

A far more accurate figure would be the AVERAGE sales price. Alternatively, data
should exclude, or make million dollar plus sales a separate category.

2. The reported sales data does NOT take into consideration incentives used by
not only major builders, but, in today’s market, by the majority of San Diego
home sellers, to entice scarce buyers to purchase their properties.

Just open up the Sunday real estate section of your local paper and the
magnitude of these incentives becomes quite apparent. Just a few incentives I
noted in my July 23, 2006 paper: $15,000 closing cost credit and $25,000 towards
an interest rate buy down or upgrades; $50K to help pay your mortgage; seller
pays interest portion of your new loan payment for first 6 months, all
non-recurring closing costs, plus 12 months of HOA fees. I could go on, but, you
must understand that the builders are not being altruistic. No, they just want
to move standing inventory, and move it now before any further declines!

While on the subject of builder incentives, it was just a little over a year ago
that the majority of builders were not even co-operating with real estate
agents. Now, the builder/agent cooperation has gone 180 degrees plus! Typically,
builders offer two or 2.5% co-op commissions. Now,

San Diego agents are being invited to catered
brunches and offered co-op commissions up to 5%, as advertised in the July 23,
2006, Union-Tribune!

San Diego homes. Actually, I would say the
majority of individual homeowners are also being forced into the incentive game.
Though not many are offering incentives from the start of their marketing, after
six to eight weeks on the market the idea becomes more appealing. Even without
offering any incentives, the majority of offers are now being presented with
buyer incentives built-in as a condition of sale!

A year ago one would be hard pressed to find any individual San Diego home
sellers or major new home builder offering incentives. Now, it is just these
incentives that also skew the appreciation data. A $500,000 home sale with a
$25,000 interest rate buy-down/closing costs package incentive will be recorded
as a $500,000 sale. Yet, the $500,000 sale, in reality was only $475,000 or 5%
BELOW the reported sales data!

Other factors not being mentioned in the press that are important to our market
direction are:

Typically the period from late March through September is the strongest for
San Diego real estate sales. What does both a
huge and continuing month over month sales decline and now a home appreciation
drop, during this ‘hot’ time, portend for the market as it enters the weaker
Fall/Winter period? Lastly, the bulk of the interest only, 100% loans used to
prop up our market for the last few years, has two or three year time periods
until the re-amortization (at the current prevailing interest rates) of the loan
balances. The majority of these interest rate adjustments will occur in 2007 and
2008.

In my opinion, this is no ‘return to normal’ or ‘slight correction’ to the San
Diego real estate market. By year’s end there will be no denying we will
experience a double digit appreciation decline. A decline that will take years,
not months, to work itself out.

*Note -This material is subject to copyright and any unauthorized use, copying
or mirroring is prohibited

With 33,933 unique visitors in June 2007, www.brokerforyou.com
is the un-challenged Top San Diego real estate website!
Posted by sdfsbo at 9:23 AM No comments:

Who's most at risk for foreclosure?

There's a flood of foreclosures coming -- about 1.1 million of them, a new study estimates. Here are the borrowers who are most likely to lose their homes.
By Holden Lewis, Bankrate.com
© Comstock Select/Corbis

You have a 1-in-3 chance of losing your house to foreclosure if you got an adjustable-rate mortgage, or ARM, in 2004 through 2006 that had an initial teaser rate of less than 4%.

If you got a subprime ARM in that period, you started out with a higher rate, and that puts you at less risk. You have a 1-in-8 chance of losing your home." San Diego for sale by owner
Posted by sdfsbo at 5:52 AM No comments:

Listen to our podcast....